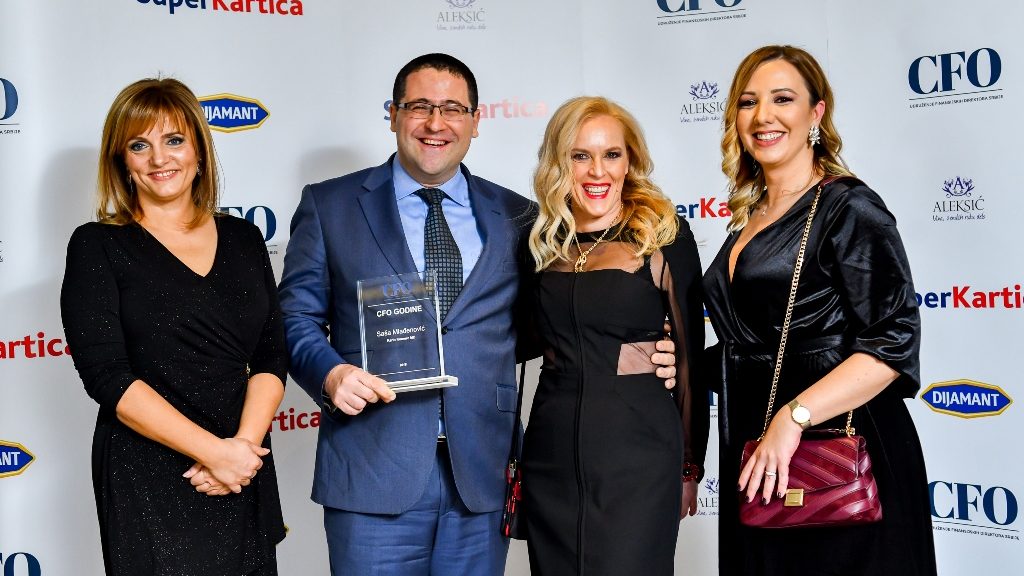 CFO Awards 2018 – On December 13, the CFOAS organized the award ceremony at the Marriott Hotel in Belgrade.

CFO Association of Serbia (CFOAS) is the only professional association that brings together financial directors in the territory of the Republic of Serbia. CFOAS members manage finances in companies that generate € 5 billion of revenue and employ 46,000 people.

The award for the the best financial director for 2018 belonged to Saša Mladjenović, CFO, Karin Komerc MD company.

Expert jury was consisted of: Dejan Mraković, Partner, Tax & Legal, Deloitte, Đorđe Dimić, Partner, Advisory, Crowe RS and Milan Ćulibrk, Editor-in-Chief of NIN. Based on 8 nominated candidates, members of the Association, the jury selected shortlist of three candidates, based on their expertise, achieved business results for the company, but also on the basis of the integrity and authority that the candidate has built inside and outside of his company.

“This is a great acknowledgment for me because it comes from a competent jury and professional colleagues whose opinion I highly appreciate and respect. After twelve years of devoted work this prestigious award came. This is a great inspiration for me to be even better and more successful in my business”, said Sasa Mladjenovic, financial director of the company Karin Komerc.

“The goal of choosing the CFO of the year is to raise the awareness of the domestic public about the importance of the financial profession and the strengthening of the role of financial directors in the economy and institutions of importance. We are particularly pleased that this year award was given to Saša Mladjenović, who carried out the financial consolidation of the company Karin Komerc MD, which is one of the market leaders in the construction industry in Serbia“, said CFOAS Board member, Mina Janjić.

“It is our great pleasure to promote the financial profession and good practice in the financial sector by choosing the best financial director. Due to numerous challenges in the domestic economy, the next activities of the Association will be focused on the exchange of practical experience, regional cooperation, tax policy and business environment improvement, as well as strengthening the role of financial directors in the economy and institutions of importance”, said CFOAS Manager Aleksandar Plavsin.

After the formal part of the program, the members enjoyed networking and a cocktail. We thanks to Super kartica, Dijamant and Deloitte, as well as the Aleksic Winery for their support in organizing this event.